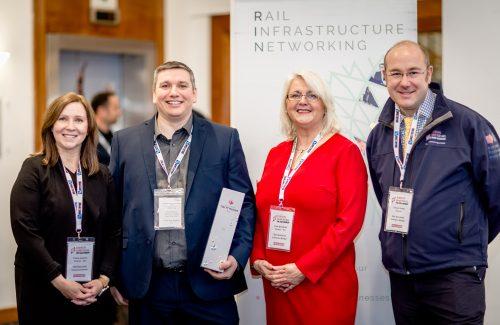 Entering its third year, Rail Infrastructure Networking (RIN) is a not-for-profit quarterly networking event, each taking place in a different city with a specific link to the UK rail network. Beginning in Birmingham in September 2016, RIN has become bigger and stronger with visitors and exhibitors flocking to each event – the ninth of which took place at York Racecourse on 22nd November 2018.

The event saw more than 90 exhibitors with over 400 visitors come to York to discuss new opportunities and develop new potential partnerships as the rail industry gears up for the huge levels of investment that CP6 and HS2 will bring. The number of visitors reached record levels for the York event, which was three times bigger than last year, and railway infrastructure companies are already registering their place for the next event in London in February 2019.

Sponsors and exhibitors have also enjoyed the benefits of RIN. Many of the exhibitors has spoken of the excellent amount of new business generated from introductions made at RIN events with many citing revenues of hundreds of thousands of pounds.

Simon Taylor, Chief Executive of specialist rail marketing and PR agency Mercury Group Limited, who market RIN events, said: “We have exhibited at every event and at each one we have made some great contacts, developing collaborative relationships and generating new business. RIN is a fantastic way to meet new industry acquaintances and to showcase your business.”
So far RIN events have taken place in Birmingham, Doncaster, Crewe, York, Derby, London and Wigan.

RIN is organised by Jobson James Rail, a business which offers specialist insurance solutions for companies and individuals in the rail sector. Director of Jobson James Rail, Keven Parker, said: “RIN is different from other rail industry events, being free to attend and free from sales pitches and presentations. This has undoubtedly helped its growth, all visitors like the fact that their networking time is not interrupted and the venues are now selling out well in advance of each event.

“Three events have now been booked for 2019 and we expect to be back in Yorkshire for the final event of the year again.”

The Rail Industry Association (RIA) – the representative body for UK-based suppliers of equipment and services to the worldwide industry – is aligned to RIN. Its influence has helped to introduce more Principal Contractor Licence holders to RIN events.

The success of RIN has led to the creation of a sister event next year – Rolling Stock Networking (RSN). Modelled on the format of RIN, RSN will be an annual event and is likely to take place over a longer period, potentially 9.30am to 3.30pm. The inaugural event is scheduled for 11th July 2019 at the Derby Arena.

Exhibit at the event from just £200+VAT - click here